The order is part of an £8 million, three year contract placed last October under which Optare was awarded preferred supplier status by trent barton and which will see around 65 buses from across the Optare range delivered to them.

Whilst the basic development of the Tempo SR was carried out by Optare’s in-house team, the 12 month project involved close collaboration with trent barton and its design consultant, Ray Stenning of Best Impressions. This resulted in a number of detailed styling features being incorporated that both enhance the appearance of the bus and allow for the application of graphics with a stronger visual impact.

The 12 metre Tempo SRs have seating for 41 on Esteban Civic V3 seats trimmed in a specially designed moquette and with standees can carry up to 85 passengers. Double-glazing has been specified and the buses have a six camera CCTV system.

trent barton will use them on its current rainbow 4 route, which operates daily at a ten minute frequency between Derby and Nottingham via Sandiacre and Stapleford. The service accounts for almost two million passenger journeys a year.

Jeff Counsell, managing director of trent barton, said: “The Tempo SRs will replace the current five year old vehicles on this route as part of our on-going product development plans and life-cycle investment.

“Overall vehicle styling and livery has been developed in tandem with Ray Stenning of Best Impressions and we are delighted with the result which we see as yet another step change in what we are offering to our valued customers.

“The vehicles will come finished in a metallic paint finish and the brand identity will also be freshened-up as part of our on-going drive to ‘wow’ our customers into using public transport more by making the bus an attractive travel option.

“The Tempo SRs will also be the first buses to reflect a newly styled and updated trent barton corporate identity which aims to provide our customers with the reassurance that this product comes from us with our usual stamp of quality as standard.”

Ray Stenning of Best Impressions said: “I believe passionately in the power and purpose of the line in automotive design. There is a singular, prominent line that rises from the front and flows in a continuous blade sweeping along the edge of the roof. It has energy and motion, and with minimally adorned, naturally curving planes and soft radiuses, the road-hugging, curvaceous body shape is deeply satisfying.”

Optare Commercial Director Chris Wise adds that he is pleased that the first Tempo SRs are going to trent barton. “This is a long-standing Optare customer and one that is highly regarded across the industry. I am confident that their use on this well patronised and high frequency service will prove the durability, fuel efficiency and passenger appeal of this exciting new model.

“Our design team found the input that trent barton and Ray Stenning provided throughout the project to be very useful. During a number of detailed specification meetings we were able benefit from their views and advice and to make several changes to the shape that improved the visual impact of the bus whilst ensuring that we produced a vehicle that is fit for purpose.” 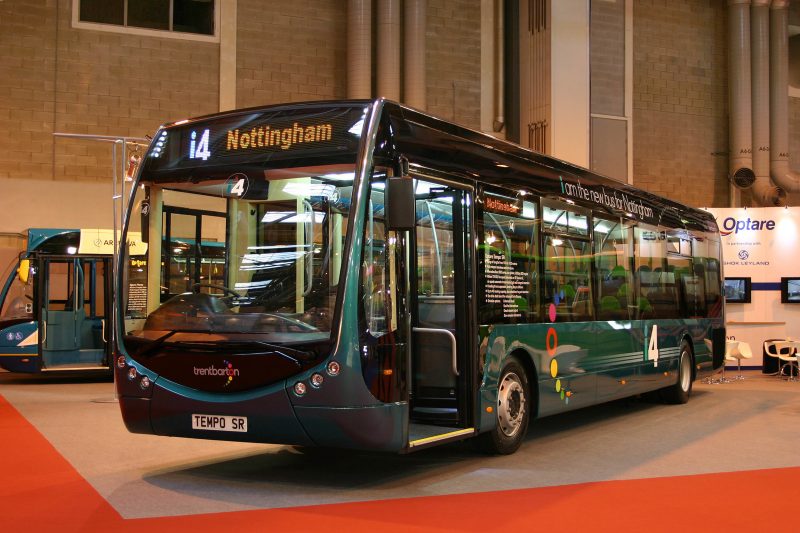