Optare, one of the UK’s largest bus manufacturers, is thrilled to celebrate the launch of its Solo into feeder service in Dubai with the Road & Traffic Authority (RTA).

The RTA Solo is a new derivative of Optare’s ground breaking midi-bus.  This 8.5m variant has been developed in partnership with the RTA to provide a nimble fuel efficient feeder vehicle that can gain access to areas not open to larger buses.  The first of its kind in the region.  This innovative wheel forward vehicle can carry up to 32 passengers in a bespoke configuration on a compact low floor, fully accessible platform .

Optare have designed and built the RTA Solo at its facility in Sherburn, near Leeds in the UK.  The RTA’s specification includes many new and state-of-the-art features such as Geo-fenced saloon air conditioning, colour destinations, real time passenger information and telematics.  The Optare team subjected a specially built prototype vehicle to rigorous climate testing to ensure that passengers travel in air conditioned comfort and the bus delivers world class performance in ambient temperatures beyond those experienced in even the hottest Dubai summers.

“I am proud to see this exciting project reach a successful conclusion.  The RTA Solo presented the business with many new technical challenges.  We have bettered these challenges.  I believe the Solo will provide the RTA with a powerful tool in growing patronage in Dubai and Optare an opportunity for further growth in the region.”

“The delivery of the new batch of buses is part of RTA’s masterplan to improve public transport in Dubai and keep pace with the top international standards. Our objective is to deliver best-in-class services to public transport commuters and match the sustained growth in the number of riders.

HE Mattar Al Tayer, Director-General and Chairman of the Board of Executive Directors of Roads and Transport Authority

The new buses will be deployed on 17 routes: 8 existing routes and 9 new routes highlighted by metro link buses routes, low-demand routes, and routes serving residential areas which do not require the operation of large buses. The new buses will serve new districts and widen the geographical coverage of public transport in Dubai, increase the occupancy rate, and enhance multi-modal integration.”

The step is also aligned with RTA’s efforts to make public transport the ideal choice of mobility in Dubai, and raise the percentage of public transport journeys to 26% by 2030, which requires providing public transport options characterised affordable, high performance and comprehensive coverage.

Swaidan Al Naboodah have partnered with Optare in Dubai to launch the Solo into service and provide 24/7 operational support.  Al Naboodah is a long established partner of both the RTA and Ashok Leyland, Optare’s parent. 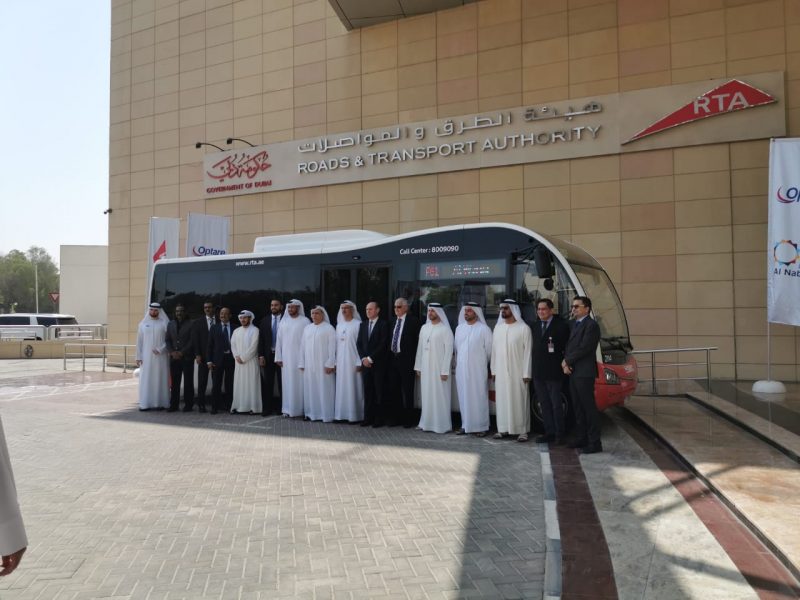